Each community is unique in time and place. Among the people places in the Township of Rideau Lakes, Elgin is unique. Communities such as Delta and Lombardy were nurtured by falling water and rumbling mills. Portland and Newboro attracted early travellers with canoes and steamboats. But Elgin prospered without waterpower or waterside. Its pioneers of the early 1800’s found that nurtured by a benign mid-latitude climate there grew a luxurious mix of white pine and oak. This forest thrived on a deep sandy loam, almost boulder-free, gently sloping and easily drained, easily plowed and very fertile. This fl edgling community soon won the notice of the surveyors and builders of the Rideau Canal. By coincidence of geology, this pioneer site became the source for much of the sandstone used to construct the great dam at Jones Falls and the locks there and nearby. Bustling work camps presented an insatiable demand for local teamsters and teams, a lucrative market for food and fodder. Families with names like Delong and Halladay prospered. They came to this emerging centre of commerce to trade their barrels of potash and salt pork for tea and fi ne tea cups, to have their horses shod and harnesses stitched, boots cobbled and buckets smithed. Even after the completion of the Rideau Canal in 1832, the community that was to become Elgin persevered and prospered on its foundation of rich soil and strategic location. Elgin has persevered through economic depressions across country and continent. It has prospered through wars fought near and far, a Civil War to the south and two World Wars. It has seen the rise and the fall of a century of cheddar cheese industry. It now thrives as a commercial hub for citizens and tourists here at the Keystone of the Rideau Corridor, a UNESCO World Heritage Site, a National Geographic Destination.

The village developed on Lots 12 and 13 on Concession 2 of the Township of South Crosby (Hub of the Rideau, p.200). Those lots were granted in 1801 to Leeds County women, Susannah Wiltse and Rebecca Wing, both daughters of United Empire Loyalists. Neither took occupancy and both parcels were eventually purchased by Samuel Halladay. In 1818, Ebenezer Halladay bought a 100 acre portion of Lot 12, Concession 2 from his brother and settled on that portion which now forms the south-east quarter of Elgin bounded by Main and Kingston Streets. As a young boy Ebenezer had been blinded in one eye when he tried to undo a knotted shoelace with a fork. The utensil fl ew out of his hand and struck his eye. His handicap did not prevent him from enlisting in the 2nd Leeds Militia during the War of 1812, nor did it hinder his many farming, business and civic activities. Within a decade Eben had cleared 25 acres, built a log house and was becoming a prosperous farmer. After the death of his fi rst wife Jane Leggett, he married Parthena Olds and the couple raised a family of 11 children from his two marriages. Ebenezer and his sons Benjamin and Phillip played signifi cant roles in their hamlet, Halladay’s Corners. Along with selling lots along Main St., they donated land for the first two schools, the South Crosby Community Hall, the Evangelical Methodist Church and the Halladay Burial Ground. 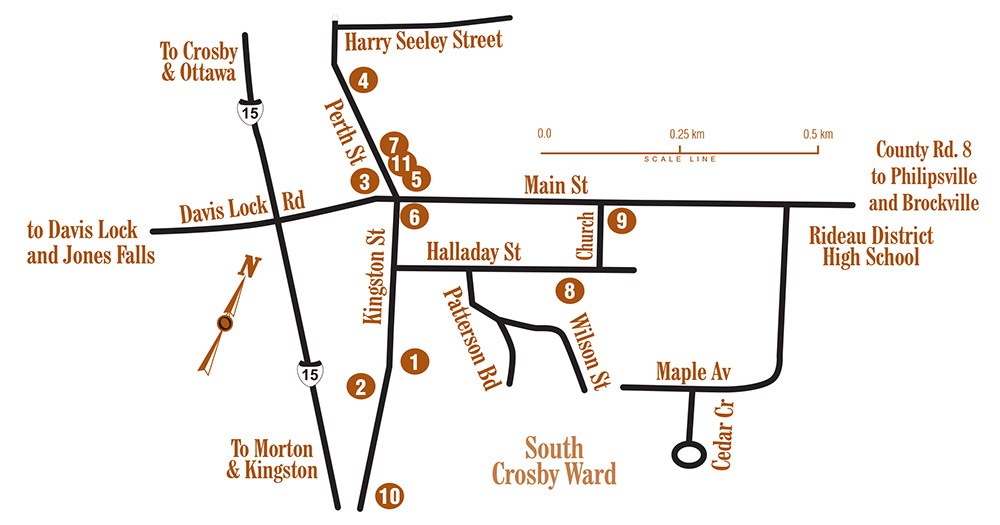 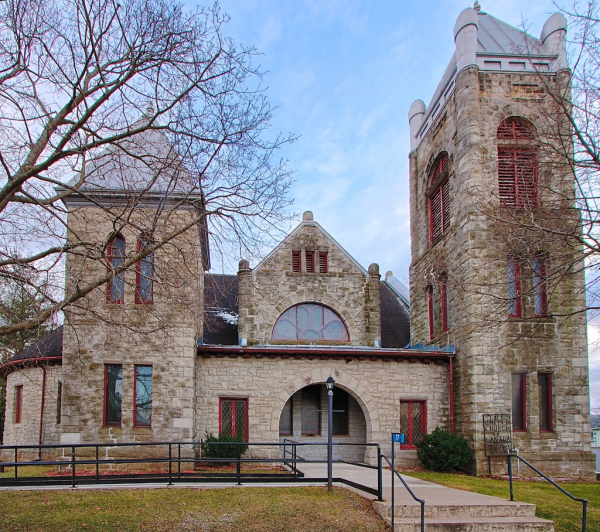