The year 1796 saw the first settlers in Stevenstown; settlers who came from Vermont with Elder Abel Stevens following the Revolutionary War. After several name changes, this community with destiny became Delta. On a rich and fertile delta beside Lower Beverley Lake, Delta’s ‘raison d’etre’ was the dam built on a local creek to power its mills. As a consequence, an artificial lake called Upper Beverley was created. By the early 1800’s this community was a flourishing farming and industrial village. Over the decades, Delta became home to a growing number of pioneer trades and crafts including general stores, a variety of smiths, hotels, a tannery, distillery, brickyard, foundry, cheese factory, carriage works, a newspaper and among others services, even a hospital. Many of these early structures, the skills and talents they housed and the families they homed have been lost. But fortunately a significant number of buildings remain to illustrate the life of a busy and prosperous community. As well, many customs remain. For example, the annual Delta Fair is a thriving tradition dating back to 1830. The 20th and 21st centuries have brought many changes to Delta as to other communities across Eastern Ontario; a shift from an agricultural to a tourist economy, from a rural to an urban way of life. The Municipal Heritage Advisory Committee (M.H.A.C.) endeavours with this Heritage Tour of Delta to illustrate a variety of architectural influences reflected in the buildings of this colourful community. Amble casually with us on this tour. Imagine the ring of the mason’s hammer, the whripp of the carpenter’s saw, the humming of mills, the singing of choirs, the laughter and tears of family and village life as it was a century or two ago. 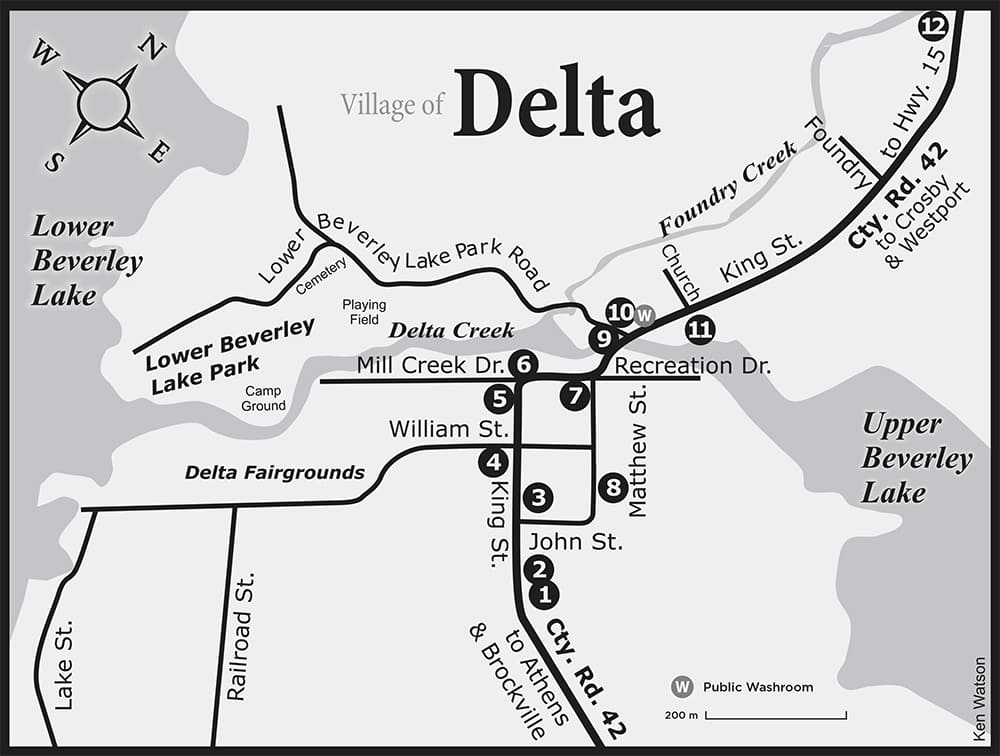