Throughout the 1800s Chaffey’s witnessed a continuous flow of steamships and barges that carried colonist, wood products, and minerals from South Shield mining. Cordwood for the steamers, cheese from the ice house and grain were loaded from warehouses beside where the present lockmaster’s office is located. The locks operated 24 hours per day 7 days a week. After 1900, the timber was gone and south shield mining was no longer profitable and shipping declined. Fortunately bass fishermen had discovered the teeming lakes. By the 1930s, over 40 guides operated from the Opinicon and Simmons Lodges. A new era of tourism began to develop.

The hamlet of Chaffey’s Lock is nestled on a beautiful isthmus of land lying between Indian Lake and Opinicon Lake. In 1822, Samuel Chaffey and his wife Mary Ann built a Grist Mill, Saw Mill, Fulling and Carding and distillery on the rapids between the two lakes. When the Rideau Canal Construction began in 1828, the mills and Samuel’s dam had to be removed. Samuel never saw their removal as he had died of malaria the summer before.

John Haggart and John Sheriff were the contractors hired by Lieut. Colonel John By for the building of the Chaffey site. The lock and by-wash were completed by 1831. The first lockmaster was William Fleming, who had served as a corporal in the 7th Company of the Royal Sappers and Miners during the canal’s construction. The canal and locks were operated by the British Ordnance Department until 1853, at which time they were turned over to the Government of the Canadas. The only time that military troops garrisoned at the Lock Station was during the 1837 Rebellion of Upper Canada. The canal, built for military purposes, only saw soldiers when they changed British Garrison Regiments and they passed through to their postings at Kingston or Niagara.

The Lockmaster and his staff were the only inhabitants of Chaffey’s until 1870. In 1872, John Chaffey, nephew of the original founder, opened a grist mill and woolen mill on the Opinicon Lake side of the by-wash. Part of the house near the mill, Fernbrae, was built as the miller’s residence. During the first years of the mills operation no bridge existed for the farmers to take their grain to mill. It was ferried across until a swing bridge was built in 1884. Although the original Chaffey’s Mills had a bridge, it was too low to pass vessels and Col. By had it removed.

The hamlet became a fishing centre prior to 1900 when tent camps opened in two location near the locks. In 1899, William Henry Fleming, the third Lockmaster, bought property from the Crown and built what is the centre portion of the Opinicon Hotel. A year later, William Laishley purchased the house and added a wing calling it the Idylwild. In 1902, it boasted accommodation for 40 guests with a large dining room and cool verandahs. In 1904, Laishley sold out to a group principally from Youngstown, Ohio who called it the Opinicon Club. The hotel operated as a private club until 1921, when it was taken over by William Phillips a Pennsylvanian. It has remained with his descendants since then. The resort period continued to grow with Simmons’ Lodge which once boasted a fine dining room and Dorothy’s Lodge. From the early 1900s, the Alford’s boat building business grew into Alford’s Marina now Browns. An Alford’s mechanic opened Franklin Marina. The Community Hall, built by the Chaffey’s Women’s Institute in 1932, was a centennial project on the canals 100th birthday.

Until the Canadian Northern Rail Road came through Chaffey’s in 1912, the principle way for the fishermen and tourist to arrive was by the numerous passenger vessels such as the Rideau King and the Rideau Queen.

There were a few cottages built in the early 1900s, but the cottage era really began after 1950. After 1950, a setting of trees and lakes became a source of relaxation and rest from the stresses of city life. To catch the large mouth bass that Chaffey’s had become famous for and to have a shore dinner built the hamlet into what it is today.

Discover Chaffey's Lock by downloading the pamphlet and taking the tour! 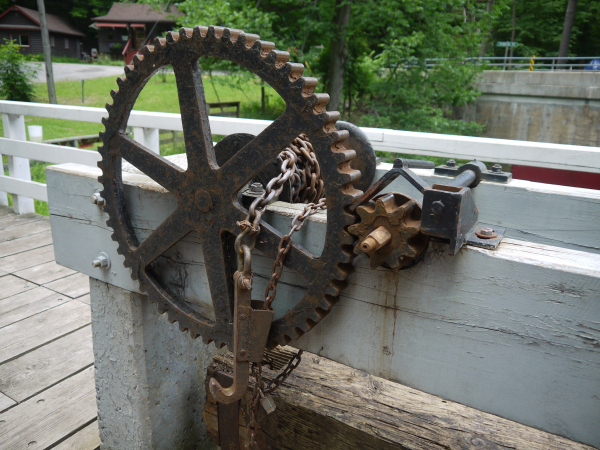