The History of North Crosby

The history of North Crosby Ward stems, in many ways, from its geology and geography. Between 1,600 and 400 million years ago, the region’s rocky foundations were formed by the “mountain-building” period of continental collisions, by the actions of tropical seas, by millions of years of erosion, and by what is known as the Rideau Lake Fault. These prehistoric phenomena yielded the exposed bedrock of the Canadian Shield in the north of today’s ward, as well as the limestone and shale in the south. As the glaciers receded, 12,000 years ago, they scraped away much of the topsoil on what has come to be known as “the Mountain.” The glacial meltwater accumulated to create a vast inland extension of the Atlantic Ocean called the Champlain Sea which covered the southern part of the ward, until it too receded 6,000 to 8,000 years ago.  Between these two geologically distinct northern and southern regions of the ward, a string of lakes formed along the Rideau Lake Fault line:  Wolfe Lake, Sand Lake and the Rideau Lakes. One of Ontario’s major watershed divides cuts across the ward, forming a height of land that continues to send the waters of those three lakes north to the Ottawa River, while the waters to the south of the divide flow south to Lake Ontario.

The first Europeans came into the region up the Rideau River system, led by Mississauga guides in 1783. The land around the portage from the Rideau system into Mud (later Newboro) Lake was described by these early explorers as “too rocky to cultivate.” However, the southern plain ultimately provided farmland to settlers, the first of whom arrived in 1819. These settlers were a combination of British immigrants, migrants from other British colonies, such as Nova Scotia, and decommissioned soldiers from the War of 1812. Also, Canadian-born offspring of the earliest settlers near Lake Ontario and the St. Lawrence River came, seeking land, and moved into what was still a wilderness in the ward. As farming grew in the ward, numerous mills sprang up, powered by the rivers of the local watersheds.

The proximity of these watersheds to each other, and their water volume, were deciding factors in the choice of a route, in 1826, for the canal linking Bytown and Kingston. But despite that proximity, the height of land at the Isthmus – the area around what later became Newboro – had to be excavated to link the two watersheds. This cut, through Precambrian bedrock, presented one of the greatest challenges of the Rideau Canal construction. Its completion came at the cost of the lives of labourers, as well as soldiers from the 7th Company of Royal Sappers and Miners, who died as a result of accidents and malaria. Nevertheless, these soldiers and labourers, along with their families, formed another influx of residents, some of whom settled in North Crosby.

The depth required of the excavation at the Isthmus was reduced considerably by an ingenious engineering decision. The water level on the north side of the Isthmus was raised by building a dam and another lock partway down the long expanse of what was then called Rideau Lake. A natural narrow and shallow point had long provided a ford across the lake at what was called The Upper Narrows. The dam and lock station at The Upper Narrows, now called Narrows Lock, created what is today Upper Rideau Lake. It flooded enough land to allow water from the Rideau watershed to fill the cut at the Isthmus as well as the lock station there, which, when opened, allowed boats to pass into the southern watershed. This lock station at the Isthmus, now called Newboro Lock, controlled the water at the top of the Rideau Canal system, which opened in 1832.

While local farms grew wheat and potatoes for their own consumption, the Rideau Canal provided the means to carry North Crosby’s timber to wider markets. Log rafts and sawn timber left North Crosby throughout the 1840s. The land was quickly cleared, creating a barren landscape quite different from its reforested appearance today.

The canal also opened the doors to an influx of new immigrants. In 1847, thirty thousand Irish farmers came, fleeing the potato famine in Ireland the previous year. Eager to have their own land, some were able to settle near family or friends. But others who came without land or contacts squatted on a few acres on the still-largely-unsettled Mountain. This was a wilderness with which they had no experience, with poor, rocky land for farming, and some did not survive.

On other more established farms in the southern part of the township, the rock became an asset. The expertise of early Scottish stone masons is still evident today in the many stone houses that dot the countryside. Churches, one-room school houses, mills and cheese factories were also built, initially of logs, and then wood frame and stone construction. Some of these structures remain today, and many have been converted into private residences.

Through the 1850s and onward, farms began to produce surpluses that were taken to markets, initially via the canal, and later by rail. Wheat, corn and oats, butter and cheese, pork, potatoes, wool and lumber were all transported. As the farms became more prosperous, local towns grew up to provide the specialized services and manufactured goods they needed. Newboro and Westport had foundries, blacksmiths and tinsmiths, masons, tanners and shoemakers, seamstresses and tailors, mills for various purposes, general stores and more specialized merchants, harness-makers, wheelwrights and wagon-makers, distilleries and breweries, inns and a post-office, and more.

Religious rites were initially provided by travelling priests and ministers from regional Catholic and Protestant missions. The first structure built for religious services in the ward was wood-frame, in the 1830s, in what became Westport. It was used as a school and by local Baptists and Methodists. The first Catholic church (and school) in the ward was a log structure built in 1840 on the Mountain, the site of which can still be found today on Parish Road.

From 1858 to the early 1870s, tens of thousands of tons of iron ore was extracted from two mines near Newboro: the Matthews Mine and the Chaffeys Mine, as well as a couple of smaller mines in the ward. Most of the ore was shipped through the canal and on to Pittsburgh and Cleveland. There were also several phosphate mines, the largest of which was in the northeast of the ward.

In 1888, the Brockville, Westport and Sault Saint Marie Railway came to the ward and for a time rail and canal vied for the business of carrying passengers and freight. Rail overtook the canal as the main mode of transport, but with the arrival of private cars and trucks, and an expanded network of roads, the railway eventually disappeared.

In 1910, the ward and areas bordering it had forty-two cheese factories. They were supplied milk by 1,042 local dairy farms and produced over four million pounds of cheddar. The cheese was initially shipped out by canal boat, cooled by ice cut from local lakes, and later by rail.

Around the turn of the 19th to 20th century, the local geography spawned a new industry. The local lakes teemed with bass, and fishers and their families came from far and wide. Fishing lodges, boat building, and guiding supported the local sport-fishing industry, and farmers sold off their waterfront properties for rental cottages. While the ward’s population dropped in the 20th century, farming and local industry continued. To this day, the local towns remain bustling communities. The ward has retained many of its long-standing families, but it also regularly attracts new residents. The ward is especially busy through the summer months when seasonal residents return, and visitors come to enjoy the ward’s natural beauty, as well as its local sports, arts community, shopping and dining.

Pamphlet: Heritage Map of the Township of Rideau Lakes 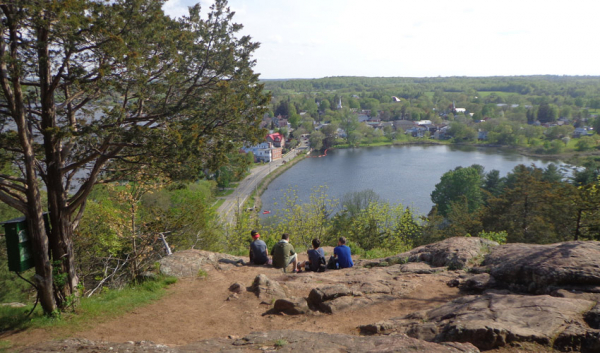