The History of Jones Falls and Morton

Countless moons ago, Indigenous people lifted their birch bark canoes from Sand Lake and portaged past roaring rapids, down a mile-long canyon to put into Whitefish waters and the Gananoque River to the St. Lawrence. Local land and landscape changed radically with the building of the Rideau Canal (1827-32). At this site, one of the greatest challenges of the canal’s construction was the building of a great arched dam, 19m. high and the largest of its time in North America. This dam held back the water of a much larger and deeper Sand Lake and provided navigable depth to the locks. The four massive locks could take steamboats and barges down to manmade Whitefish Lake, created by a dam built at Upper Brewers. This dam turned a seasonal river and marsh into a navigable body of water en route to Kingston. A defensible lockmaster’s house was added in 1841 to protect the canal and the region from invasion by the still-feared Americans to the south. From 1845, a resident blacksmith began hammering repairs to essential ironwork. The Jones Falls lock station has been kept largely the way it was in the 19th century and is one of the most attractive on the canal. The way-of-life of an early lock station has been vividly chronicled in the logbooks of Peter Sweeney, first lockmaster at Jones Falls. At the foot of Jones Falls is the legendary Hotel Kenney which has served shippers and travellers, fishers and vacationers, from 1888 to the present.

At one time called “Whitefish Falls”, George Morton purchased the water rights and the adjacent land in 1851. He registered a plan for a model village in 1857 and by 1861, had built saw-, grist- and plaster-mills, powered by Whitefish Falls. A garrison fort protected travellers and traders, smiths and families from feared Yankee invaders bent on Manifest Destiny. A warehouse beside Morton Bay transshipped Morton’s wealth down the Rideau while steamboats brought produce and travellers up Whitefish (Morton) Creek from Delta and Lyndhurst. Mr. Morton even added a model farm and cheddar cheese factory to his model community. But when the managers of the Rideau Canal needed water for locks, Morton’s model mills sat idle. After a couple decades of disappointment, Morton had to sell off his economic interests. Now, a century later, ghosts and a few beautiful buildings persist from his visions. His brick schoolhouse, built in 1853, was design to incorporate the most current of educational philosophy and hexagonal design. Used as a school until 1900, then as a residence, “The Pimple” survives as one of the most unique buildings in our Township. Also surviving is George Morton’s General Store, the oldest of its type in the Township, serving the neighbourhood until recently from the time of its construction in 1855. The Amos Judd House was also built in 1855, and occupied and later owned by Amos Judd, agent for Morton’s many business interests. The James Manuel house, built in 1858, is very similar in design to the Judd house, with the same distinctive wide gable. Its brick cladding was later covered with stucco. Now, instead of rumbling mills, Morton radiates wonderful flat-water routes for canoe and kayak in four cardinal directions. 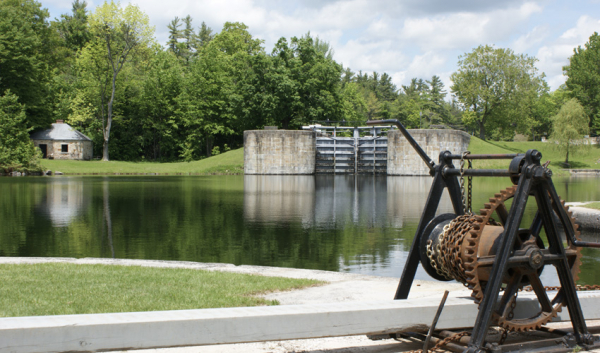