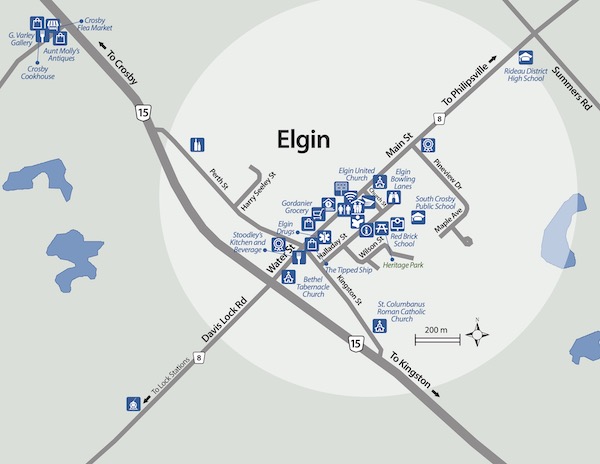 Elgin is situated just off Highway 15, in the heart of corn country. It offers many services for both the visitor and local resident. There are three churches in town, a library, a public school and a regional high school. The local population is about 300 but, in the summer, Elgin serves as the hub for several thousand cottage residents.

Elgin Days is an annual festival with a parade, flea market, barbecue and more. It is usually held on the second weekend of July.

The History of Elgin

The land on which the community of Elgin grew was first settled in the very early 1800s by farmer-landowner Ebenezer Halladay. For its first decades, it was called “Halladay’s Corners.” Even though the Rideau Canal was constructed some distance away, its construction brought dozens of quarrymen and teamsters to a camp near Halladay’s Corners where they quarried thick strata of Cambrian sandstone. These ashlars were transported to Jones Falls for the construction of the great dam and locks, as well as the locks at Davis and Chaffeys.

In 1841, Mormons from the United States converted many local people to the Mormon faith, and many of these joined the exodus through Illinois to Salt Lake City in 1849. But shopkeeper Ira Mitchel stayed, and for some years succeeded in calling his community here in north Leeds “Nauvoo” after the Mormon community in Illinois by the same name, meaning “beautiful place.”

In 1850 a post office was established and the growing farming community was officially named after the Eighth Earl of Elgin, James Bruce, Governor General of Upper Canada, 1847–1854.

Throughout the latter half of the 19th century, Elgin prospered to become the most prominent village in South Crosby Township. It was, and remains, a thriving service centre for farmers, commuters, summer residents and visitors to the surrounding lakes.

Source:
Pamphlet: Heritage Map of the Township of Rideau Lakes 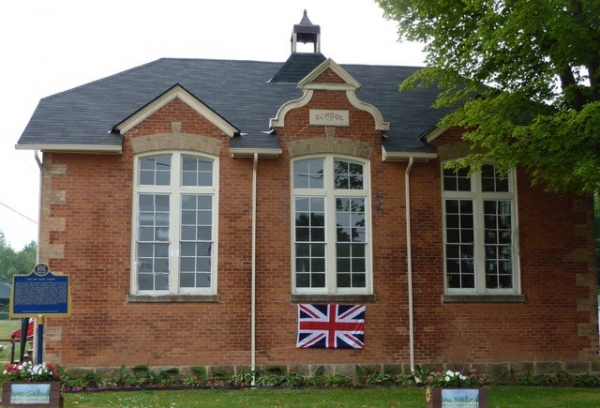