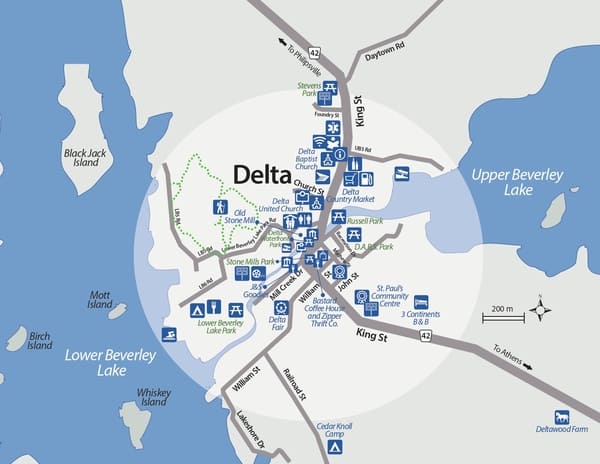 “Delta is a vibrant community rich with heritage and natural amenities. Delta will leverage its assets to foster a mixed community that supports families, seniors, youth, and visitors through sustaining and developing local services.”

Delta has a beautiful natural rural landscape, is rich in heritage, and is located in the centre of the Frontenac Arch Biosphere, between two pristine lakes.

Currently the village has a library and a recreation centre that includes a rink, tennis court and offers other sports. Lower Beverley Lake Township Park is a family park and offers lots of room for family camping, cottages for rent, a beach and a boat launch, a great playground for children and the village ball diamond.

At the end of July, the Delta Fair (1830), one of Canada's oldest fairs, (now 190 years old) is held. Originally an agriculture fair, it has expanded to include many fun activities for the whole family and is a social hub and homecoming. Its agricultural roots remain with events such as home craft judging, tractor pulls, horse pull and shows and the ever popular Midway.

The last Saturday in September is the Harvest Festival (since 2015) centered on the Old Stone Mill with lots of local produce, crafts, and hot apple cider.

Winter brings Celebrating the Season (since 2004) on the four Friday & Saturday evenings before Christmas, with the Old Stone Mill beautifully lit with "candles" and thousands of Christmas lights in Lower Beverley Lake Park and throughout the village. This event brings in thousands of visitors to our community who can enjoy a meal at the church, a wagon ride through the park, and a visit to the Old Stone Mill.

Along with the Fair and Festivals, Delta has many other attractions and organizations like the United & Baptist Churches, St Paul’s Community Centre, Branch 207 of the Royal Canadian Legion and Auxiliary, Delta Fire Station, Delta Mill Society and many other groups in the community who work together to ensure the success of continuing major events. This vast volunteer network always has room for newcomers.

The main attraction in Delta is the Old Stone Mill, built in 1810, now a museum and a designated National Historic Site of Canada that brings people from all over the world. The Mill has been completely renovated and had working millstones installed for its 200th anniversary in 2010. It is open to the public from Victoria Day weekend to Labour Day and on special events, where it continues to grind and sell locally grown heritage Red Fife wheat, offers interpretation, exhibits and employs local students annually to conduct guided tours.

There are public boat launches on both the Upper and Lower Beverley Lakes and access to the UNESCO Rideau Canal is nearby (at Portland and Newboro).

Local services within the Township of Rideau Lakes include Country Roads Community Health Centre and several pharmacies. The urban centres of Kingston, Brockville, Smiths Falls and Ottawa are close by for hospitals, shopping and entertainment.

Enjoy delightful walking tours of the village, cycling routes through the scenic countryside and quality paddling on both Upper and Lower Beverley Lakes.

The residents of Delta have always taken pride in their community and no more so than with the creation of the Delta Community Improvement Committee who after the last restaurant closed, decided it was time to revitalize the community.  A marketing strategy created the DO Delta Ontario logo, web site and Face Book page.  The DCIC’s current project is the Delta Waterfront Project, right in the heart of the community, and across from the Jubilee Block, which is in the process of restoration.

This park will bring a sense of place to the main hub of our community. There will be an accessible ramp so everyone can meander down to the waterfront to just sit by the water or access a boat. There will be better and more stabilized docking, a kayak launch, and an Amphitheatre. Boaters will once again be able to come up the Delta Creek and dock their boats to access the local businesses, community services, and heritage destinations.

Delta is a destination that calls people home and welcomes others to come and see!

The History of Delta

Believed to be the first community north of the St. Lawrence River and the earliest community of (Bastard) Township, this scattered farming settlement was initially known as “Stevenstown” named after Settler, Elder Abel Stevens, a United Empire Loyalist and Baptist Minister, who brought a number of pioneer families from Vermont beginning in 1794.

The current mill site was purchased in 1808 by William Jones where he and partner Ira Schofield started construction of the Old Stone Mill in 1810. The evolving community of “Stone Mills” later became “Beverley” and finally in 1856 with a touch of Greek revival, the village became officially known as “Delta”. Its sizeable mill pond guaranteed water power for most of the year and farmers from more arable acreages to the south teamed to Delta to get their wheat ground for flour, grains milled for grist and barley mashed for distilling. This prized mill site provided the nucleus for a flourishing agricultural and industrial community throughout the 19th and early 20th century. 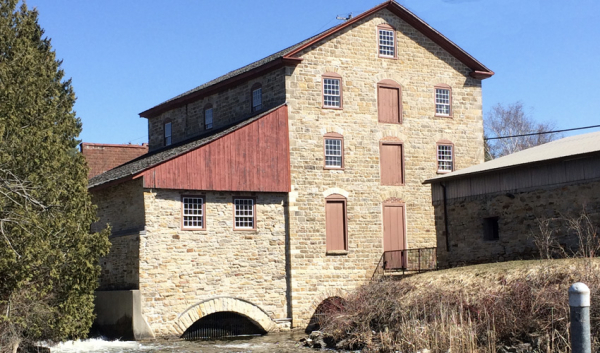